The seasoned developer hones his or her craft over many years, and knows how to use the right tools at the right times. This article looks at two simple tools you can use to boost your debugging efficiency.

First, when it comes to the Node.js language, it's important to acknowledge our tried-and-true friend, console.log. No doubt this is the first debugging tool all JavaScript and Node.js developers use out of the gate. Yet, once a code base starts to become even remotely complicated, console.log gets tedious. Fortunately, Node.js core itself ships with its very own built-in command-line debugger.

Suppose you have the following script:

When this code snippet executes, it throws an error and we want to debug this to inspect the value of the result as it moves through the async calls.

To use the Node debugger, invoke this script with the debugger: node debug app.js

The debugger starts, indicates that it is listening on port 5858, and is breaking at line 1. From here, it's easy to step through the code as you would in any normal debugging tool using the following debug commands:

Node.js run asynchronously, and in our app.js snippet, we are running async code. For the uninitiated, debugging async code can be tricky. For instance, if you were to step through this code as you would in a non-async language (i.e. Java), you will quickly find yourself deep inside Node's core async code, as shown below.

In this case, I've stepped through several lines of code and now the debugger is looking at module.js line 301. This is not our application code, and the logic I was trying to debug is temporarily lost - at least until I find my way out. But I don't know if that's five lines or 100, and this just makes things more confusing. The good news is that it's easy to remedy this situation by using breakpoints.

The best way to avoid getting tangled deep within core Node functions is to set breakpoints at strategic points within code. To do this using the Node command-line debugger, just insert the debugger; directive directly into your source at the desired line.

Here I've inserted debugger at lines 12 and 19. Next, fire up the debugger again and use the continue command to move the debugger to the first breakpoint. 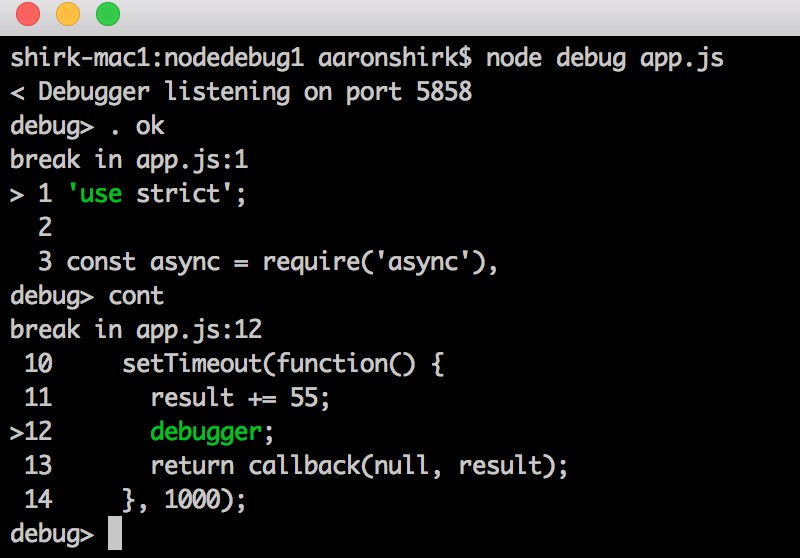 Here the debugger is indicating that it paused at line 12. At this point, it's easy to inspect variables using the built-in debug repl command. Issue the following commands to view the value of the result variable at this point:

Here you can see the result variable has a current value of 55. Pretty nifty!

So you've just received a whirlwind tour of the built-in core Node debugger. It's a full-featured debugger at your fingertips, invoked in seconds directly from the command-line. Next, let's take a look at our second debugging tool, Node Inspector.

Node Inspector is a debugging interface that provides a similar debug experience to what you might find in a commercial IDE. It's based on WebKit and works in Chrome or Opera. Certainly, the Node core command-line debugger is handy, but Node Inspector can offer a significant improvement in terms of usability. It operates just like Chrome Developer Tools, providing an immediate boost in productivity.

There are a couple of different ways to get Node Inspector up and running. First, simply install using NPM:

This assumes, of course, that app.js is your app entry point. The --debug-brk starts the Node debugger listening on port 5858, and then immediately breaks on the first line of the application, waiting for you to take the next step and launch the inspector.

This opens the Node inspector interface and connects to the running app debugger on port 5858. It then loads the application source files, allowing you to easily select which source files you want to inspect and set any breakpoints. 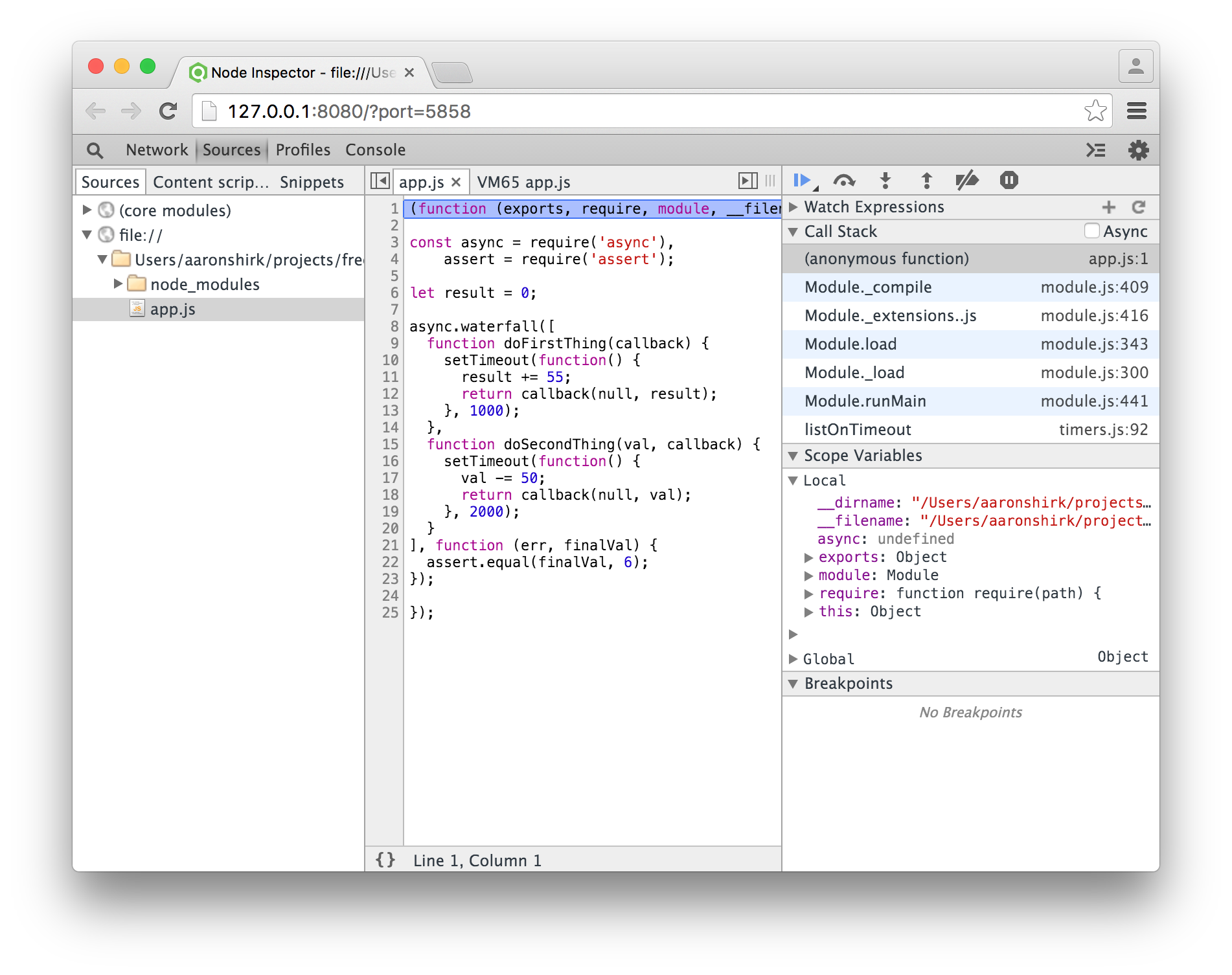 As you can see, the app.js source is loaded on the left pane, the code is displayed in the center, and call stack, watch lists, variables, etc. are listed on the right. At this point, it's simply a matter of setting breakpoints and stepping through the code.

Before we do that, though, there is a second method to get this up and running a little more quickly.

This method of debugging is done in a single command.

This performs all three steps in Method #1 for you. Why even mention Method #1, then? Mainly because it's often useful to know all the moving parts just in case something doesn't work exactly as expected. Your command line will look similar to the following, and your browser will open to the same view listed above.

To set breakpoints, click the source file you are interested in debugging, and then select the source lines. For this example, let's again select lines 11 and 17 so we can inspect variables within the async functions.

In addition to breakpoints, I've also set up watch expressions in the upper right for the result and val variables. Resume execution and inspect the values. 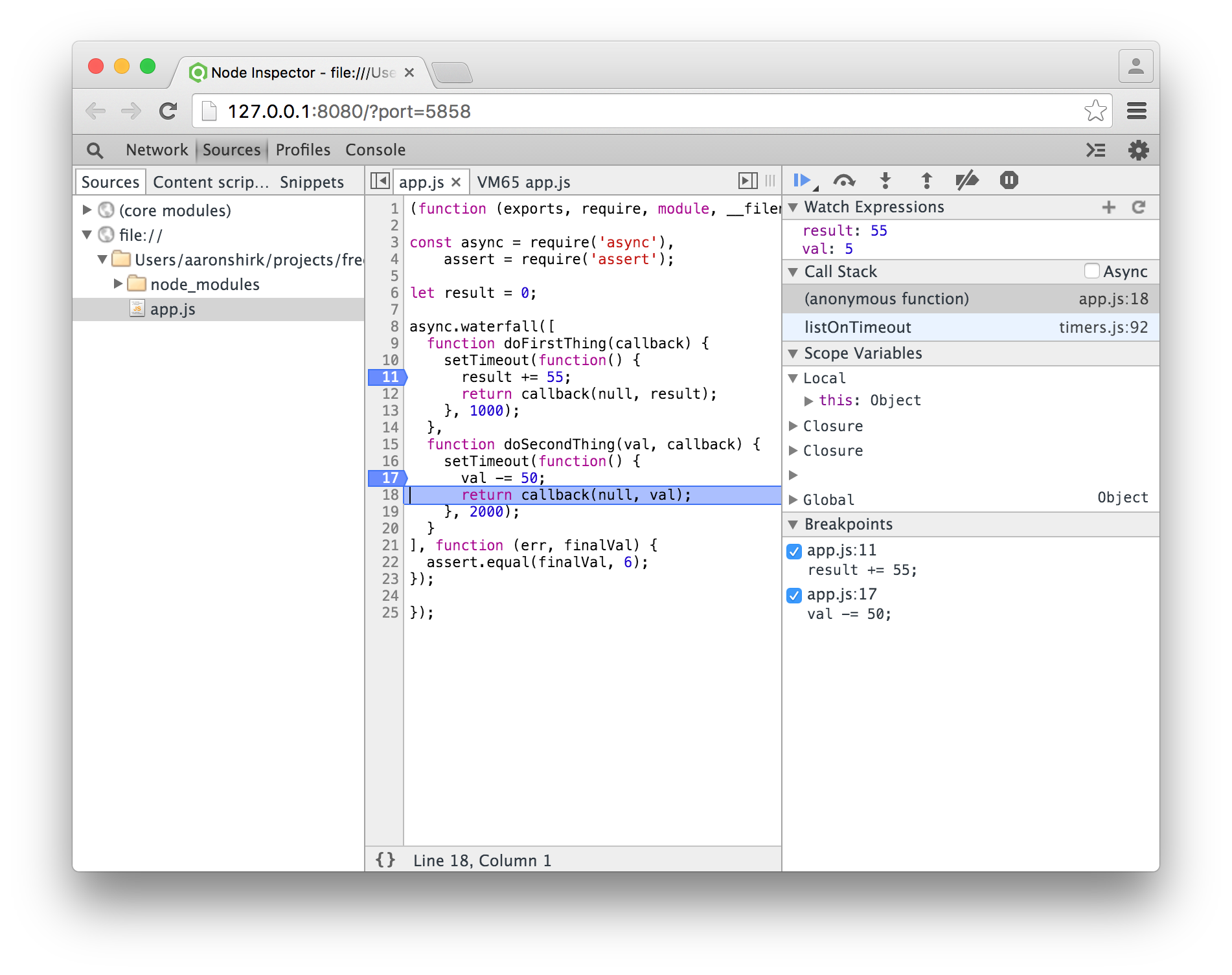 The image above shows that I've stepped through the two breakpoints and stopped on line 18, and the values of the variables are now available. In addition, I can hover the mouse over the val variable, for instance, and the expression is evaluated.

Yes, there will always be a place for console.log, but with just a couple additional mouse clicks and a few keystrokes, it's possible to have capable and easy-to-use debuggers assisting you as your code base grows. An added bonus is that you don't need an IDE to use either of these - they come for free. Happy debugging!